What happened to Freddie Gray in Baltimore, MD was tragic and further emphasizes the growing erosion of rights in the United States. However you may feel about what happened during the aftermath of his death, closer attention should be paid to his arrest and the reason behind it. What happened to Freddie Gray is very important to all preppers, but more so for black preppers. A black person is almost twice as likely to be arrested than their white counterpart for the same offense. If he didn’t die, this story wouldn’t have made national or even local headlines and would have just been another day, another arrest.

The backstory, based on the information that was released, was that Freddie Gray made eye contact with police officers and, “unprovoked,” ran from them. The officers gave chase, subdued him and noticed he had a knife clipped to his pants. He was then arrested for having a switchblade. He was handcuffed and placed in the police van, but not safely restrained in the seat, all the while asking for medical attention. The van stopped and then the officers shackled his feet, but again, he wasn’t restrained in the seat. Because he was not secured, the van’s movements caused him to be thrown around resulting in severe spinal injuries that ultimately led to his death.

The knife Freddie Gray was carrying, according to the prosecutor, was not a switchblade and not illegal. Pictures or a complete description of the actual knife still haven’t been released. These kinds of knives are categorized as spring-assisted opening and are not considered switchblades. Federal law has explicitly separated spring-assisted opening knives and switchblades. Many preppers carry these types of knives as part of their everyday carry (EDC) because of the form factor and the ease of operation. What makes these knives popular is they can be operated with one hand and that is important for self-defense weapons. By it being spring-assisted, there is no need to fiddle with the screw connecting the blade to the handle in order to flick the knife open.

If Freddie Gray wasn’t injured in the police van, he may have been prosecuted for possession of an illegal knife even though it’s not illegal. Depending on the trial, plea deal or even his lawyer, he may have been convicted and sentenced to jail or probation for doing nothing wrong. This should cause us to be very concerned. With the ever increasing “quality of life” stops by the police, which are unconstitutional, carrying a legal knife may lead to an arrest if it’s intentionally, or even unintentionally, misclassified. We see this with thousands of convictions in New York City for misclassified switchblades and gravity knives.

In New York City, plumbers, maintenance and construction workers are being arrested for possessing these knives that they use for work. Police officers there are told to target people with knives clipped to their pockets. According to their own report, 80% of the weapons found during the unconstitutional and racially biased “stop and frisk” searches are knives. Most of those folding knives are misclassified as gravity knives (which are illegal) because they can theoretically, with enough force, be flicked open. They have the highest prosecution rate for misclassified “gravity knives,” based on a vaguely worded law and officer discretion, than anywhere outside of the city, even in other parts of the state. 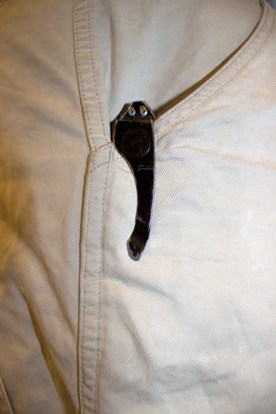 Although it’s how I carry my knife, I’m not a fan of the visible pocket carry. Having the knife clipped to my pocket draws attention to it and to me. Whether it’s from a possible assailant or law enforcement, it makes me a target. It can also cause me to be turned away from a venue or it can be confiscated. This has never happened to me, but there’s always that possibility. As preppers, we try to be prepared for many situations. Some of those situations may require a knife, that’s why it’s important to always have one. It’s also important to understand the environment where we live and travel. If you think there may be a problem with the knife you carry, don’t clip it to the pocket and keep it completely inside the pocket. It may also be a good idea to get a fixed blade knife instead if you live in NYC.

Knife Clipped to the Pocket, Don’t Do This

I used to carry a folding knife clipped to my pants pocket with the clip showing. This is a popular way to carry because it’s easily accessible. The downside is that it’s conspicuous. Just about […]